Amateur Photographer magazine recently asked for applicants for a street photography workshop with Damien Demolder and much to my surprise I was one of the 5 people selected to take part. I've chatted with Damien on Twitter for a while now so to finally meet him was an opportunity not to be missed, along with the chance of my work appearing in the magazine. Arrangements were made and I arrived at the Tate Modern for a 10am start. After introducing ourselves to each other we all had to say a bit about ourselves to Damien and Phil, and although myself, Rachael, Steve, Gagon and Nic were a bit nervous we were soon at ease and Damien explained what we'd be doing. When asked what I wanted to get out of the day I explained that although I've been shooting street photography for some years now, I'd never actually asked a stranger if I could shoot their portrait. Damien asked straight away if I was going to do it today and I said 'maybe' and hoping I'd have the nerve.

After shooting our portraits for the magazine Damien spotted a good patch of bright light for us to work with outside the Tate, concentrating on waiting for the right moment to catch our subject lit up for us by nature. The main theme of the day was looking for and then using good light, with quite strong emphasis on being bold with our exposure compensation dials. Despite using a Fuji X100 with such great controls it had rarely occurred to me before to make big changes to the exposure despite it being so easy to do. I experimented a lot with -1 and then -2 stops on the dial and it was very interesting to work like this. 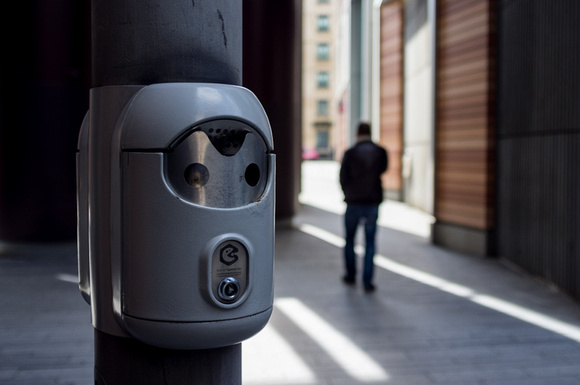 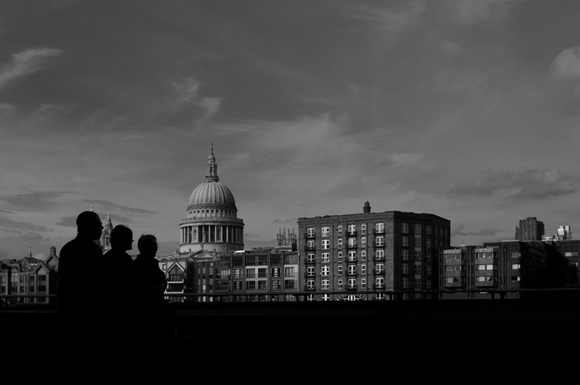 After a couple of hours or so hunger had set in so we headed for Borough Market, both to grab a delicious burger and to take some shots in the market itself. It also gave me my second opportunity to ask someone for a portrait - the first I'll explain in more detail below as it's become quite a story in itself. 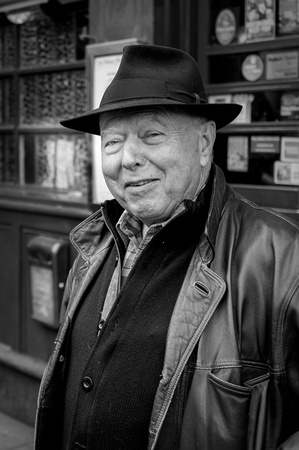 After plenty more shooting we eventually found ourselves at Fratelli's for drinks and to look at each others work, give the images to Phil and talk about what we felt we'd achieved during the day. I think I speak for all 5 of us that we had a brilliant day and learned a lot, in particular about light and composition. I'd highly recommend Damien who runs his street workshops regularly.

To continue with the story about asking people to pose, the first opportunity arose right outside Tate Modern at the start of the day when I noticed a guy enjoying a cigarette near where we were shooting, so I thought I'd seize the opportunity before I talked myself out of it. I asked if he'd mind posing for a shot as I was doing a workshop and he was only too happy to oblige. He then noticed my camera and asked if it was a Leica - I explained it was a Fuji but could understand why he'd thought it might be a Leica and our conversation continued from there. He asked what magazine was running the workshop and when I said it was Amateur Photographer he mentioned that he'd once been interviewed by them. I asked his name and thanked him for his time, and later on I started to look for information about him online. All I can say is that it's been a really interesting couple of days, and Graham Attwood is a great character with a great body of work behind him, shooting stills photography on many major movies including Local Hero, a favourite of mine. 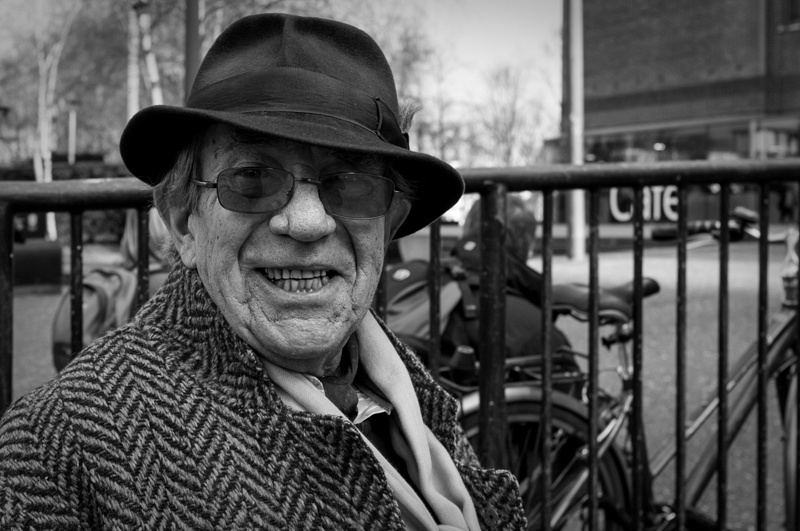 Although I'd found his web site (which went offline today sadly) there were no contact details, but luckily I found him on Facebook and we've since chatted by email and I'm chuffed to say he likes my shot of him. He'd actually commented on his page that he was pleased somebody had thought him photogenic enough to take his portrait and wanted to get in touch with me. I hope to meet up with him again some time, and it's great how a chance meeting happened to be with a retired professional photographer.

David(non-registered)
Great work, and sounds like an excellent day.
Steve(non-registered)
Hi Tim
That's a great write up of an enjoyable day. You captured some great shots - if mine are half as good, I'll be pleased. It was a pleasure to meet you all and, like Rachael said in her comment, it would be good to meet up again for some more street shooting.
Steve
Rachael Talibart(non-registered)
Hi Tim
I really enjoyed this post, and reading about our day on Thursday. You got some super shots and a wonderful chance encounter with a seasoned professional photographer. It was lovely to meet you and the others on the day and I hope some of us can get together another time for more street shooting!
Best
Rachael
No comments posted.
Loading...
Archive
January February March April May June July August September October November December
© Tim Allen (timallenphoto) 2022. All Rights Reserved.
Powered by ZENFOLIO User Agreement
Cancel
Continue